Posted on June 20, 2016 by fashionistainaspen 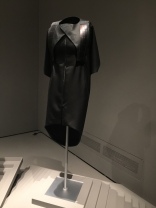 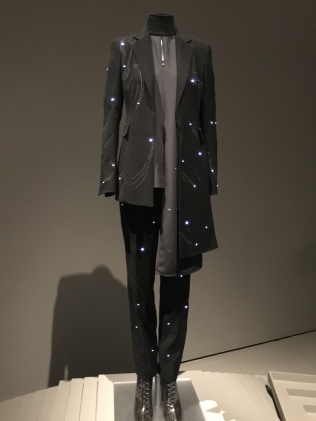 It’s been a long time, my dear readers.  For that,  I apologize.  I’ve been in Boston for the last year, caring for my dear Mother, Gloria, who is 93, and suffering from dementia.  It’s been a hard road, but I learn a little every day to make her life a little easier and mine too.  I have very little freedom yet, but we are working on that as well.  I did manage last week to go to my beloved Museum of Fine Arts in Boston to view this wonderful exhibit. I hope you enjoy the article.  Hopefully, more to come…. thank you for all your support.

I’ve been to more than a few fashion shows, but, my goodness, can you imagine a dress that can charge your phone, or one that reacts visibly to your voice!  Or how about a tuxedo that has little LED lights sewn into it?   How’s that for an entrance into a dark club or restaurant?  I love it!  The days of a dress simply being made on a sewing machine are gone!

“I often wonder if we will keep on wearing fabrics in the future or if dressing will become something non-material, something that is visible, but not tangible or touchable.”  – Iris van Herpen

The exhibit currently on at the Museum of Fine Arts in Boston makes that ominous prediction more plausible, if not tangible, or should I say… intangible.  What would Elias Howe think whose first sewing machine was patented right here in Boston in 1851?

The exhibit is divided into three sections, the first being “Performance” which presents fashion that interacts with its wearer in conceptual ways.  A second room explores work by well-known designers who have been working at the intersection of fashion and technologies for a decade or more, like Issey Miyake or Rei Kawakubo.  The third gallery, “Production,”   explores the ways designers, often in collaboration with scientists and engineers, harness new technologies to re-invent how clothing is created.

Besides the sewing machine, fashion and technology have always been linked including the inventions of synthetic dyes in the 19th century and manmade fibers like Nylon in the 20th.  With a centrifugal force geometrically speeding up with every season and every collection, emerging technologies are steering fashion’s course and will define its future.  In the last few years, computer-aided design, 3D printing, electronics, LEDs, biotechnology, and even social media have revolutionized the way garments are designed, made and worn.  According to the MFA’s description of the exhibit, “#techstyle highlights that revolution, presenting work by established designers and young pioneers who have been pushing fashion’s boundaries and challenging conventional ideas about how we make and interact with our clothing.”

I spoke with Lauren Whitley, co-curator of the exhibit, who told me that the exhibit was designed for the MFA  exclusively and has no plans to travel anywhere else after it closes here on July 10th.  “Since Boston is is known as such a hi-tech hub, and so much of technology has been developed and discovered here, with MIT (Massachusetts Institute of Technology) leading the way, that it only made sense to have the show here,” Ms. Whitley explained.

For example, as part of Issey Miyake’s 2012 collection, a group of geometric shapes unfold to form part of an ensemble: the rectangle, a bolero-  the square, a dress.  All of the garments which were developed as part of the designer’s Reality Lab, established in 2007, are made of recycled polyester fiber (PET) in consultation with Tenjin Ltd. That company’s Eco Circle system breaks down polyester fiber to the molecular level and repurposes it into usable cloth as good as the original.  The process reduces energy consumption and CO2 emissions.

I loved Ying Gao’s kinetic garment that reacts to its environment, namely a nearby voice.  Electronic sensors activate the dressmaker pins covering the surface, causing them to move and undulate in waves. “The surprising, prickling motion points to Gao’s interest in expressing ideas about the modern experience through a use of technology.  Here the spectator, as well as the wearer, engages in a curious conversation, ‘filled with misunderstanding and uncertainty.’”

I was very fortunate to see this garment in action, as it was only “turned on” from 1-2 on Wednesday afternoon and 6-7 in the evening.  So keep that in mind if you are able to visit this amazing interactive fashionista in her prickly glory.  According to Gao, “We are individuals of the here-and-now, pressured by a logic of urgency and worried about the future.”  If you didn’t know your date’s dress was voice-activated, you might get real urgent about your future in a hurry!

I was most blown away by the creation titled, Solar Dress, by Dutch born designer Pauline Van Dongen.  In 2014, she collaborated with Christiaan Holland and solar energy expert Gert Jan Jongerden to create clothing that utilized solar cells.  After two hours in the sun, the dress can charge a phone’s battery.  The design of the dress incorporates seventy-two cells, which can be hidden behind folding panels when not in use.  Pack this dress, and never worry about not having your phone charger ever again!

When I mentioned to Ms. Whitley that there was a predominance of Japanese designers being featured, she said that the Japanese “have been in the forefront of the textile industry,” but that there are  British and Dutch designs represented, as well as a 3D printed dress from a Somerville (MA) designer in the exhibit.  The fashion industry is changing rapidly,  literally interacting more directly with its consumers.  Ms. Whitley summed up the #techstyle exhibit, “It’s what’s happening now.”

One more thing…. I lust after the laser cut silver leather dress by London-based designer Giles Deacon.  A Swarovski crystal-encrusted dress with the appearance of hard metal, like a sheet of aluminum foil, it is actually soft leather coated with silver pigment and laser-cut to form an intricate lace underskirt and collar with trailing fringe.  It’s like Barbarella meets Beyonce.  It’s liquid beauty.

The exhibit runs through July 10th.  If you love fashion, and/or technology, make sure you get there before it leaves the city that gave birth to freedom and pre-fab fashion.

Hi! I've been the fashion writer for the Aspen Daily News for five years. I'm probably the only one in the Rocky Mountains since no other ski area in the region can boast our brand of style, events, and now, even our own Fashion Week. Please contact me with any ideas, events or links that you think my readers need to know! My motto: Do it with style!
View all posts by fashionistainaspen →
This entry was posted in Uncategorized. Bookmark the permalink.